Germany Vs. the UK – Which Has the Best Retail Supply Chains?

If there’s one nation in Europe with whom the British are given to comparing themselves it’s the Germans.

The rivalry goes way beyond the football field. Germany is a byword in the UK for efficiency and pride in a job well done. It’s why German design and engineering are so highly regarded. And the Germans keep a close eye on the way that British businesses approach things, not least because when innovations arrive in Europe from the US they often make their mark in the UK first.

Last year we commissioned the research company Martec to survey the ‘State of Retail Supply Chains in the UK’. Now we’ve carried out a similar survey in Germany (can be downloaded here in German). The obvious next step is to compare the two.

(If you’re interested in the latest report, you can read the Martec International 2016 report here: ‘State of the Retail Supply Chain 2016‘)

Having worked in both countries and having taken a close interest in retail supply chains in each I find the comparison intriguing. It tends to highlight the cultural differences in their respective approaches to business and decision making. I should stress that the different approaches in each country have huge strengths and each has built an extremely strong, growing, globalized economy. Each has produced great, internationally-recognized retail brands operating in different sectors, such as Tesco, Marks & Spencer’s, Lidl and Aldi to name but a few. So it’s hardly surprising that many retailers in both the UK and Germany have earned great respect. What is particularly interesting however is that it becomes clear that great results can be arrived at via different approaches.

What is particularly interesting however is that it becomes clear that great results can be arrived at via different approaches.

Firstly, from a purely personal and unscientific viewpoint, British and German business culture differs in two respects: decision making processes and the perception of and approach to risk.

On the whole the UK is a more turbulent market. More companies seem to be willing to move quickly to try out new things. Furthermore many people there regard and handle risk on the basis of the business risk a decision poses. There is generally a willingness to give new things of potential value a go so long as the downside, should the move prove unsuccessful, is limited. So many UK companies are willing to push ahead, make decisions quickly and take risks so long as those risks can be managed and the benefit-risk equation is very good.

In Germany decision making is more methodical. Businesses seem to have a tendency to work through all the potential outcomes of a decision as well as mapping out all alternatives before committing to a course of action. The aim appears to be to eliminate any risk of making a bad decision. It’s as if the ramifications of a bad decision go beyond its impact on the balance sheet: prestige and reputation also seem to be a factor. This naturally leads many German businesses to be more cautious about trying out new things. However, by thinking through the effect that any change might have on processes throughout the business it enables companies to commit more energetically when they have made their decision and that often means that subsequent success comes more quickly.

Similar differences are also discernible in the way that retail supply chains are run. Naturally well-established retailers in both countries have all the fundamental elements in order with, at least, basic forecasting and replenishment systems, visibility over all stock in the supply chain, the ability to measure the most important KPI’s and to control their processes on that basis. The goals that are rated as most important are reducing instances of out-of-stock items (Germany 83% / UK 31%) or improving availability (Germany 73% / UK 63%). However there are also some interesting differences. 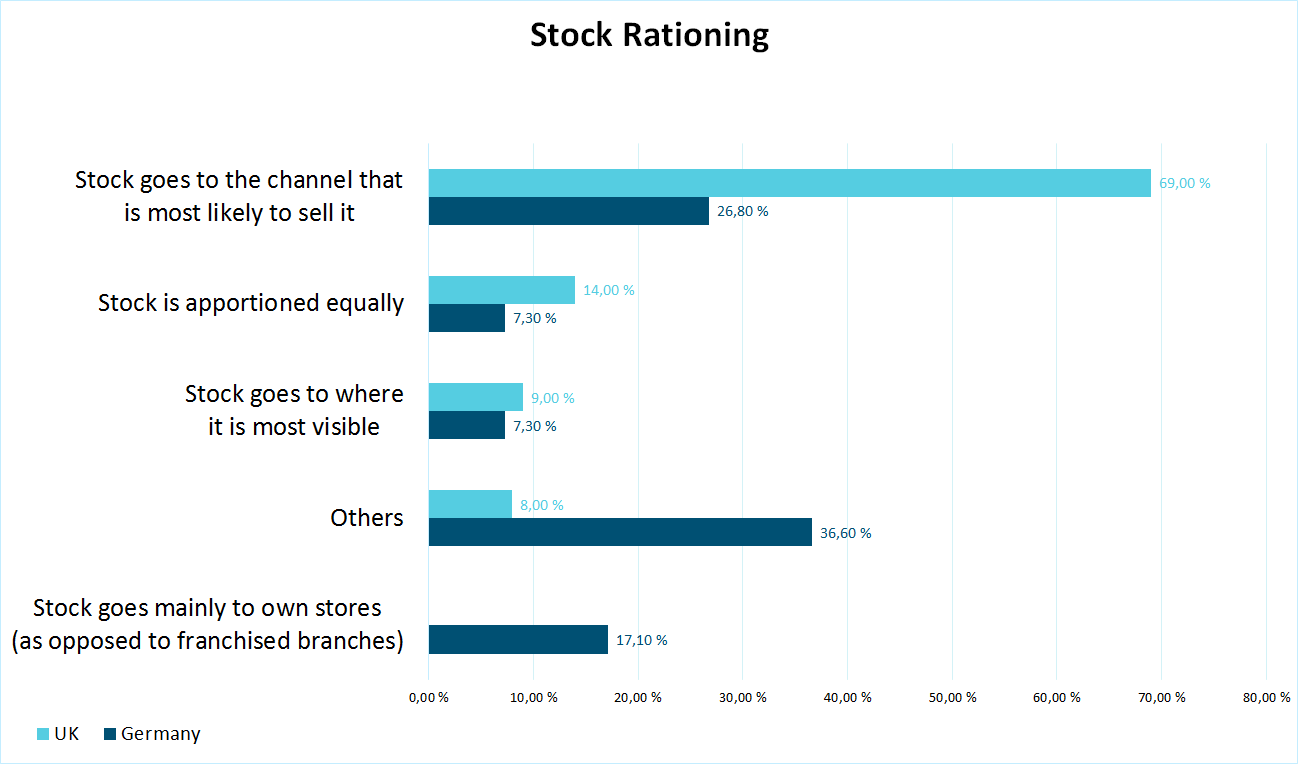 Another notable difference is seen in supplier collaboration. UK retailers more commonly share data and collaborate with suppliers than German ones do. (On average UK retailers share more than twice the amount of information as their German counterparts.) We did not ask what the rationale was for this, but my suspicion is that it is because many German retailers are unclear how it would benefit them. It is hard to deduce and measure the exact benefits retailers get from sharing data with their suppliers. The likelihood is that they get better availability and a smoother business process, but it is not certain. Germans like to be certain before committing to doing something.

3. Reasons for not investing in new systems

Other differences are highlighted by the reasons given for not investing in new systems. The biggest factors identified by UK retailers are the perceived complexity of the implementation project (22%) and not having the budget required for the investment (22%). In Germany these issues appear in third and fourth place behind other development priorities (42%) and a cultural preference for in-house developed systems (22%). Given a good reason, and because in Germany such things are rarely rushed, budgets can be made available within the timescale of the rigorous decision making process. 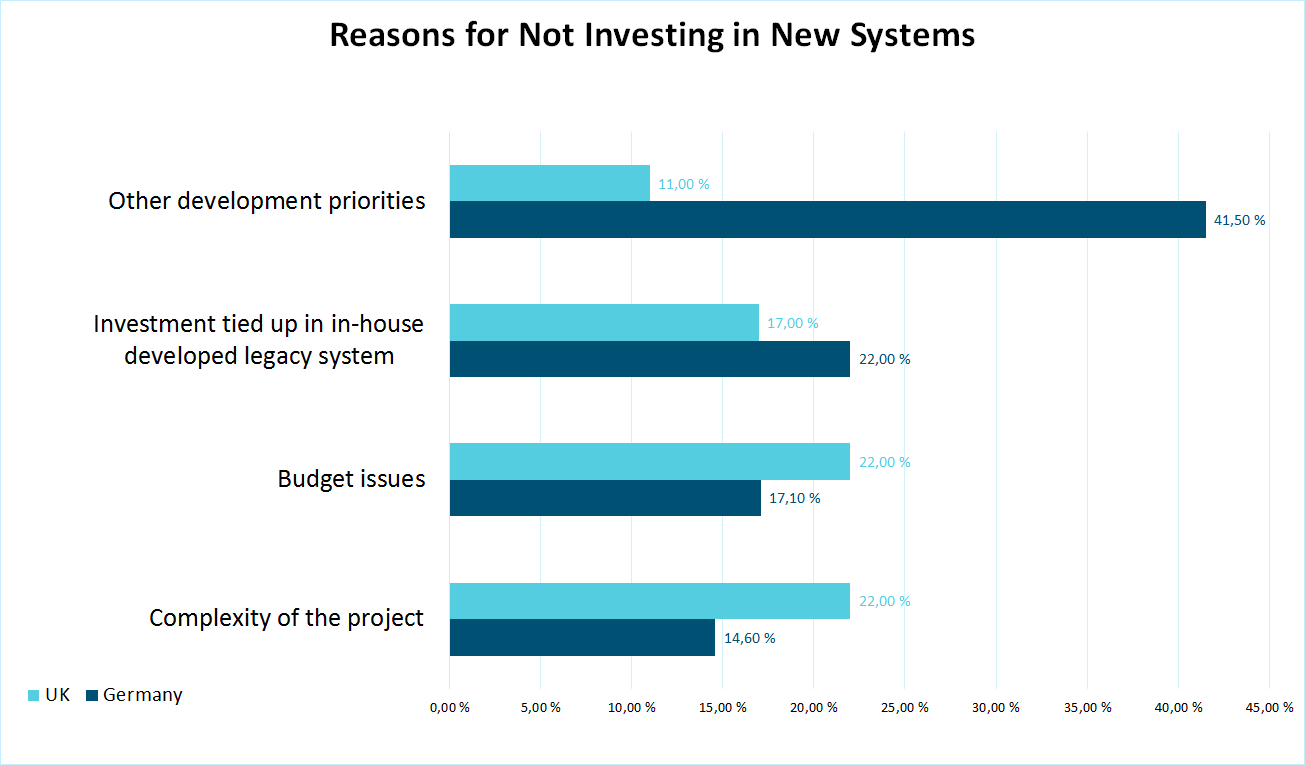 So, Which Has the Best Retail Supply Chains?

As we see, there are notable differences in retail business in the UK and Germany, but it is impossible to say that one or the other is the better. Moreover it is useful to remember that on most issues the two countries remain very similar – for example, businesses in each agree that accurately forecasting new product introductions, promotions and new store openings are all of great importance.

RELEX CEO Mikko Kärkkäinen recently spoke with Total Retail about what he sees as the top four trends impacting grocery retail this year.

This blog provides a look back on the events of 2022 with perspective on what is to come in 2023 and how RELEX is well-positioned to meet the needs of retailers and CPG companies.

3 major causes of waste in the food supply chain

This blog discusses the top causes of waste across the food supply chain and how technology can help grocery stores meet customer needs while reducing food waste and ultimately cutting their footprint.